Split at the heart of Europe

The eurozone crisis rumbles on 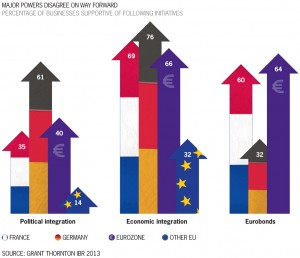 Writing our recently released Future of Europe report, the thing that stood out to me most was the divergence of business opinion on how to handle the eurozone crisis. And not just between the 17 euro ‘ins’ and the 10 euro ‘outs’ – which you might expect – but a split right at the heart of Europe.

France and Germany have driven the European project from the start. It was French foreign minister Robert Schumann who first proposed the European Coal and Steel Community in 1950 as a means to cementing peace between the two countries. This body would later become the European Economic Community and subsequently the European Union.  They drove through the adoption of the single currency. Together they account for 49% of eurozone GDP.

However, whilst 61% of German business leaders back further political integration, just 35% of their peers in France do too. Meanwhile support for eurobonds amongst French business leaders (60%) is almost double that in Germany (32%).

Why the radical differences in opinion?

Diverging economic performance is certainly putting a strain on their relationship. The French economy is expected to be 6.1% larger by the end of 2013 compared with 2008. But the German economy will be 8.4% bigger. The French economy has been flat over the past eight quarters. Germany has posted growth in six of those quarters. France will miss the 3% budget deficit target this year. Germany expects to post a surplus. The unemployment rate of 10.6% in France is almost double that across the Rhine (5.4%).

The effect on business confidence is startling. 42% of German business leaders are optimistic about the economic outlook, placing them in the top ten in our 44-economy IBR survey, compared to -50% of their peers in France, placing them rock bottom.

So where does this leave the eurozone crisis?

No closer to resolution is the honest answer. With the currency bloc in recession, the two heavyweights increasingly find themselves on opposite sides of the fence. Germany and other northern creditor nations want more fiscal austerity and greater integration. France is increasingly siding with southern debtor nations in asking for more flexibility around budget deficits and debt mutualisation.

Both can claim that the other needs to act. Germany, which underwent painful reforms to boost competitiveness during reunification, could point to the fact that between 2005 and 2012, French unit labour costs increased by more than 15%, almost double the rate in Germany (8%). France could point out that no economy has benefitted more from the single currency than Germany with its export machine boosted by a euro weaker than the deutschmark would have been.

Either way the region needs its two most important players to patch up their differences or risk the cracks between their positions widening. It would be bitterly ironic if the architects of the European project were ultimately responsible for its downfall.