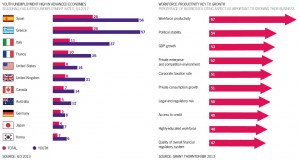 Last week, the International Labour Organisation (ILO) released their annual World of Work report. It contains some stark warnings, particularly for mature economies where it does not expect employment levels to return to pre-crisis levels before 2017. Getting people back into work, the report says, will be a “major global challenge” for years to come and the threat of “social unrest” a major risk.

A lack of jobs is being felt most acutely amongst young people. Greece and Spain, where well over half of 15-24 year olds are unemployed, are the two prime examples. Huge swathes of young people are also out of work in Italy (37%) and France (24%). Some of those counted as unemployed are working informally but others have dropped out of the labour force altogether.

And the problem stretches beyond the eurozone. In the US, youth unemployment has crept up from 12% at the beginning of 2008 to over 16% today. The UK has seen an even greater rise from 12% to over 20%. In Australia and Canada, which were less affected by the financial crisis, there have been more modest – but still significant – two percentage points rises over the same time period.

But pushing aside moral and social concerns, why should business leaders be worried? As the report says, executive compensation, share prices and cash stockpiles have been rising.

The answer is productivity. In our recent IBR survey, we asked 3,200 business leaders how important 20 aspects of an economy were to growing their businesses. They said the key issue – ahead of access to credit, economic growth or taxation – is labour productivity.

Unemployment erodes productivity. Key business skills, employability and sometimes motivation fade. Young people are likely to pick up new processes and techniques relatively faster than older peers but if they are inactive in these ‘business formative’ years, the opportunity is lost.

Historically young people struggle more to find jobs, but the current sharp and persistent rise in youth unemployment has led to commentators bemoaning a ‘lost generation’ of scarred workers. In five to ten years’ time when businesses need young, experienced hires to drive the growth of their operations, where will these workers be?

Moreover, political stability is cited as the second most important aspect of an economy for business growth. The Arab Spring perhaps provides the clearest recent example of the government-toppling social unrest that a bored, disenfranchised youth can cause. Growth in Egypt has fallen to around 2% even as the budget deficit balloons to more than 10% of GDP. And the demonstrations continue.

In Germany, where a vocational-education system keeps schooling tied closely to demand, youth unemployment has actually declined since the financial crisis. Greece and Spain, amongst others, are looking to mimic these educational practices but there is some debate as to how much credit the system should take. And in any case, such changes will take years to bear fruit.

The short-term fix is for an end to the uncertainty which is dampening global growth, which should encourage business investment. Only then will the young sitting idly on the streets of Athens and Madrid be able to cheer.